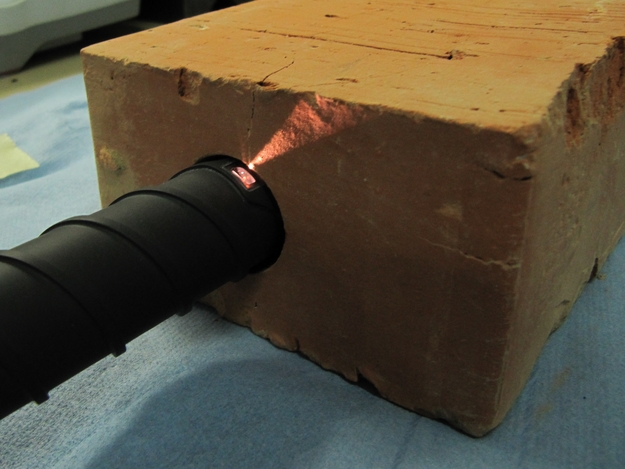 This photograph, which shows the Drill tool Engineering Model inside a red brick, was taken during a series of drilling and sampling tests performed at the Centre of Space Studies and Activities (CISAS) of the University of Padova, Italy, in April 2008. The objective of this test campaign, which was carried out in Mars-like conditions, was to verify the drilling and sampling performance of the ExoMars Drill prototype.

The Drill tool Engineering Model was integrated in October 2009. This is the first drill development model in which the Ma_Miss optical parts (i.e., lamp, optical head, optical fibres and connectors, and sapphire window) are integrated.

The Ma_Miss instrument (Mars Multispectral Imager for Subsurface Studies) is a spectrometer, developed by SELEX Galileo, to study the subsurface stratigraphy, to understand the distribution and state of water-related minerals, and to characterise the geophysical environment during Drill operations. A key component of the spectrometer is the optical head, which consists of an illumination prism and a sensory prism placed in the front part of the Drill tool and interfacing the wall of the drilled borehole via a very hard sapphire window.

The Drill tool Engineering Model has been subjected to thermal testing, down to an operating temperature of -80°C and a survival temperature of -130°C (at this level it will not operate but must survive), and to extensive sample collection testing in laboratory conditions.