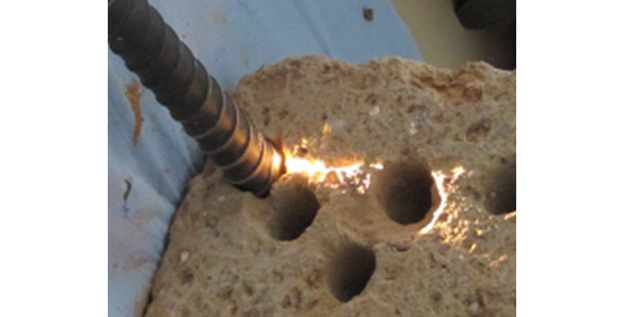 This photograph, which shows the drill and Ma_MISS prototypes inside a brick, was taken during a series of drilling and sampling tests performed at the Centre of Space Studies and Activities (CISAS) of the University of Padova, Italy, in April 2008. The objective of this test, which was carried out in Mars-like conditions using reference material (tuff, red brick), was to evaluate and characterise the performance of the system.

The Ma_MISS instrument, developed by SELEX Galileo, will provide valuable information for the study of subsurface soil and rock layers (stratigraphy), investigating the distribution and state of water-related minerals, and characterising the geophysical environment. A key component of the spectrometer is the optical head, which consists of an illumination prism and a sensory prism that captures the reflected light from the observed target and directs it to a spectrometer for analysis. The instrument interfaces with the wall of the drilled borehole via a durable sapphire window.