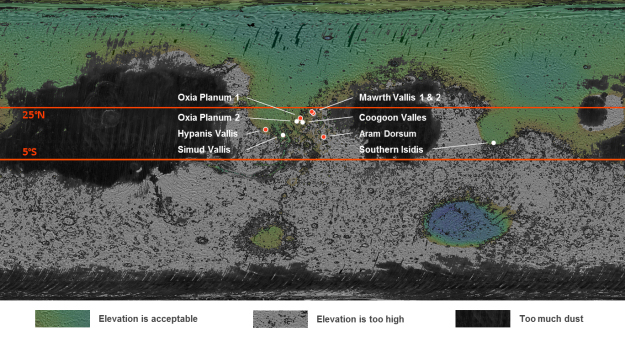 The locations of 8 proposed landing sites for the ExoMars 2018 mission are indicated by circles. Four sites (indicated by red circles) were favoured by scientists at the first ExoMars 2018 Landing Site Selection Workshop, held at ESA's European Space Astronomy Centre near Madrid, from 26 to 28 March 2014. These are: Mawrth Vallis (for which 2, very similar, proposals were received), Oxia Planum, Hypanis Vallis and Aram Dorsum (referred to as Oxia Palus in earlier reports).

This image was compiled by D. Loizeau for the Landing Site Selection Working Group.