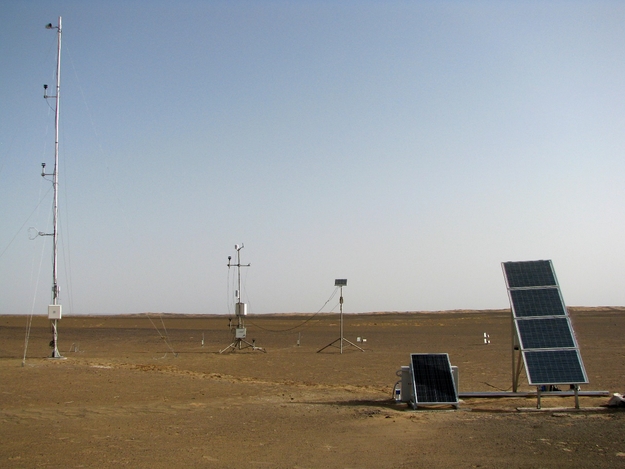 This measurement station was established in the Western Sahara desert by the DREAMS team for a field test campaign carried out in 2014.

DREAMS is a small meteorological station on the ExoMars Schiaparelli module that will measure local weather conditions at the landing site on Mars, such as temperature, humidity, pressure, dust opacity, wind speed and wind direction. It will also perform the first ever measurements of the electrical properties of the Martian atmosphere. Schiaparelli will land on Mars during the dust season, in October 2016.

In order to study in detail the effect of electrification during dusty events - dust storms, dust devils, blowing sand and dust - the team performed several campaigns in the Western Sahara desert in 2013 and 2014. The measurement site was chosen for its similarity to Mars.

The masts shown here are 12m, 4.5m and 2.5m in height, in contrast to the miniaturised versions (about 20.5 cm in height) that were developed for DREAMS.

An interview with Francesca Esposito, Principal Investigator of DREAMS