ESA - Robotic Exploration of Mars - COMARS+ in the cleanroom 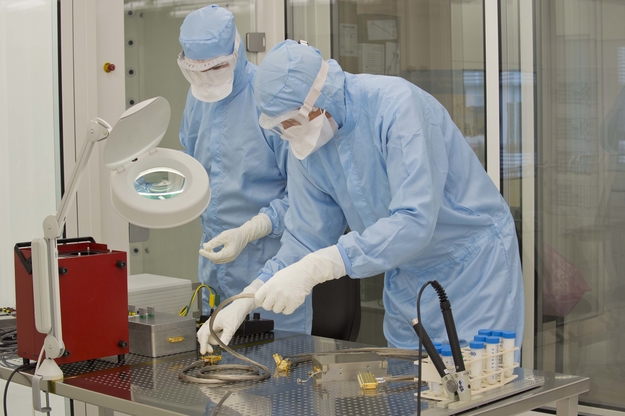 The Combined Aerothermal and Radiometer Sensors Instrument Package, COMARS+, will measure aerothermal parameters on the exterior of the ExoMars 2016 Schiaparelli entry, descent, and landing demonstrator module as it passes through the Martian atmosphere.

The sensors, located on the back cover of the module, will measure the pressure, the temperature of the module's surface, the rate at which heat energy is transferred to the surface (total heat flux rate), and the amount of radiated heat from the hot gas to the back cover (radiative heat flux).

Two so-called ICOTOM narrow band radiometers in each COMARS sensor are provided by CNES. In addition, a broad-band radiometer provided by DLR is integrated close to the COMARS 3 sensor. The data produced from this instrument package will provide essential input for the improved design of future missions landing on Mars.

Since Schiaparelli will land on the surface it is subject to strict planetary protection regulations. For this reason COMARS+ was assembled in a cleanroom at the European Space Research and Technology Centre (ESTEC) in Noordwijk, the Netherlands. This photograph shows team members assembling the package and doing functional tests.