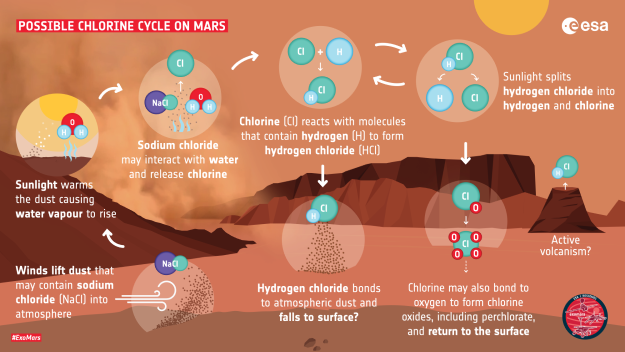 This graphic describes a possible new chemistry cycle on Mars following the discovery of hydrogen chloride in the atmosphere by the ESA-Roscosmos ExoMars Trace Gas Orbiter. Salts in the form of sodium chloride (NaCl) – remnants of evaporated oceans and embedded in the dusty surface of Mars – are widespread on the surface of Mars. Winds lift this salty dust into the atmosphere. Sunlight warms the dusty atmosphere causing water vapour released from ice caps to rise. The salty dust reacts with atmospheric water to release chlorine (Cl), which itself then reacts with molecules containing hydrogen (H) to create hydrogen chloride (HCl). A similar process takes place on Earth: sea salt is blown into the air, and if it mixes with water vapour, chlorine becomes available for chemical reactions that form HCl.

Further reactions could see the chlorine or hydrogen chloride-rich dust return to the surface of Mars perhaps as perchlorates, a class of salt made of oxygen and chlorine. The HCl is observed to quickly appear and disappear from the atmosphere so it must be created and destroyed rapidly, with some fraction returned to the surface.

The ExoMars observations suggest this might be an annual process driven by the changing seasons, specifically the warming of the southern hemisphere ice cap during southern summer, which releases water vapour into the atmosphere. The extra warmth also generates strong winds as air moves from warm to cool regions. In turn, the winds lift more dust, triggering regional and global dust storms.

The graphic is simplified to show very broadly one possible way that hydrogen chloride is generated; there are likely additional pathways for the chemical reactions that could also be at play, perhaps with other trace gases that ExoMars hasn't discovered yet.